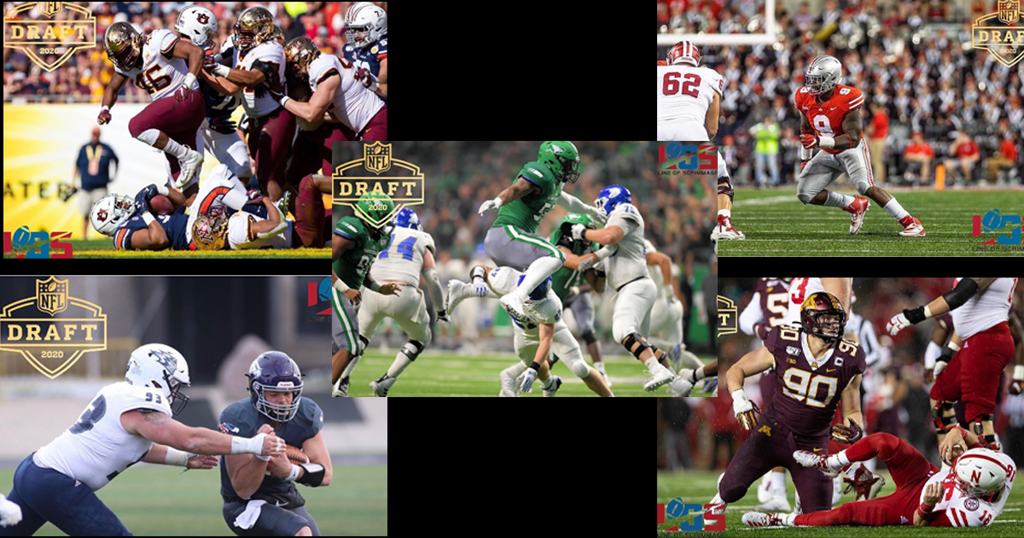 Our 2020 draft preparation is in the books. It was a difficult year and COVID-19 made us change our plan of approach, but it did not stop our dedicated athletes that had a goal in mind and were willing to adapt by any means. Let's start the introductions.

Strong defensive end weighing about 255 to 260. Has the versatility to play outside linebacker or 3 technique. A 4-year starter at the University of Minnesota, Winston is a good smart player whose best physical strengths include his feet and elite hands. What sets him apart from most and will stand out to NFL scouts will be his maturity and his leadership. Winston started working out with LOS 2 seasons ago and says that his game has leveled-up each season since, with his senior year being the best. Winston is expecting to be a late-round or UDFA in this upcoming draft.

Weighing in at an impressive 293 lbs standing at 6’3, this All-B1G selection probably has the most upside of any of the players in this year’s class. Jashon was not as fortunate to see much of the field during his first four years at Ohio State, but this past year he was allowed to not only start but be a key part of the nation’s best defensive front. Jashon just started training with L.O.S last year before his breakout season and has seen a ton of growth since then. Jashon’s best attributes include his speed and agility. Not only did he run an impressive 4.6, but his ability to change direction makes him a sought-after commodity for teams that would like to have versatile 3 technique or 3-4 end. Jashon is expecting to be a middle to late-round pick up in this week’s draft.

One of the ultimate underdog stories in the nation, Sam started his college career as a walk-on tight end. Currently standing at 6’4 290 lbs, Sam finished his Career at Minnesota a 1st team All B1G selection. When you talk about a student of the game you have a player like Sam in mind. Along with his “Super Strength,” Sam’s best attribute is his ability to dissect offenses, read tendencies, and acting on these instincts. An extremely coachable player, Sam will have a great opportunity to make any D-line coach happy with his ability to play the whole line and adapt to new schemes quickly. Sam will most likely be a late-round pick in this week’s draft, it would not be a surprise if he went even higher as his stock continues to shoot up.

Mason might be the most interesting prospect in L.OS’s 2020 draft class. Standing at 6’3 260lbs, Mason has proven himself as a true Sack master in the Big Sky Conference. This 5-technique and OLB has an explosive get off and the ability to bend around the corner at full speed. Besides playing at the AA level, what makes Mason interesting is his Canadian citizenship. If he does not get drafted this week, he will be a lock to go in the 1st round of the CFL draft. Mason has been in touch with over 10 NFL teams this week and expects to get some serious attention after the draft in free agency.

Mason Olson has had quite the path to get to the point he is at now. Mason started his career at North Dakota School of Science and after taking a few seasons off landed himself at the University of Wisconsin-Stout in Menomonie, Wisconsin. Mason is a strong gap plugging nose tackle that finished his senior season as a first-team all WIAC selection. On top of getting into the backfield, Mason as a double team nightmare, his 36 reps on the bench press help him get penetration while occupying two linemen. Mason is looking to making his name known by Gm’s through after draft signing or rookie camp on a Tryout basis. Mason has a ton of upside and since starting with L.O.S the last offseason we have seen nothing but improvements to his game that would make us think otherwise.

Good luck to all of our guys, we can’t wait to see them on the other side.